I just finished Suskind’s The Price of Loyalty about Paul O’Neill’s experiences as Treasury Secretary under Bush. It’s a remarkable book. One particular passage really stayed with me. It’s on page 292, and follows Dick Cheney’s extraordinary assertion: “Reagan proved deficits don’t matter.” I’ve taken the liberty of quoting the whole thing in the extended entry, here.

END_OF_DOCUMENT_TOKEN_TO_BE_REPLACED

On Saturday I received a slim, glossy package in the mail. It was from Macallan, and contained a DVD with a 17 minute film about the making of Macallan single malt Scotch. Quite apart from being interesting and educational, it got me thinking about 21st century marketing. A DVD is now a disposable piece of collateral material. Mmmmm….
So here’s a suggestion for George Soros, the “legendary investor and philanthropist” who’s pledged his fortune to get rid of George Bush. Fund the creation of a short video based on the devastating book The Price of Loyalty: George W. Bush, the White House, and the Education of Paul O’Neill by Ron Suskind. It doesn’t have to be fancy: a few video clips, plus still shots (using the Ken Burns Effect from Apple’s iMovie, perhaps), with a voice-over narrated by a super-trustworthy voice. Morgan Freeman would be good. Slap it onto DVD and mail a copy to every household in the USA. The Golden Globes went to the good guys tonight. Lord of the Rings, Lost in Translation, and Mystic River all won in the film categories, while Angels in America cleaned up in the TV section. There were even a couple of awards for that bizarre British comedy series The Office.

As we approach the release of the Hutton report, and with more and more officials publically voicing the opinion that there were no Iraqi WMDs, Tony Blair has retreated to the position that it’s all about his “integrity”. Screw integrity: here’s what I would ask Blair if I had the chance. “On February 26th 2003, you asked Parliament to support military action against Iraq. If you had known then what you know now – know for a fact, not believe or hope – would you still have asked for a vote to go to war? Yes or no.” It’s not such a hard question….

I picked up the DVD of About A Boy yesterday. It’s based on the novel by Nick Hornby, one of the most incisive novelists observing contemporary England. For some reason I missed it when it was in the theatres. Anyway, it’s beautiful – and very, very English. It’s easily the best thing Hugh Grant (Will) has done, and the 12 year old Nicholas Hoult (Marcus) gives a performance that is both authentic and thoroughly polished.
Oddity: the DVD includes an “English to English” dictionary, to explain to US audiences the meanings of such terms as “bugger off”, “bloke”, “bloody”, “barmy”, and “get the wrong end of the stick”…

Driving into work this morning I was listening to the BBC World Service on WBUR, my local PBS radio station. In their response to Bush’s State of the Union speech yesterday , several Democrats had expressed anger that Bush’s policies had left the US isolated. In typical fashion, the BBC decided to follow this up and invited a couple of guests to discuss US isolation.
I didn’t catch the name of the first man, an academic with an Arabic name at something like the Institute for the Study of Democracy. The second guest was Tim Spangler from the UK chapter of Republicans Abroad International.
There was about about 10 minutes of discussion, during which Spangler basically cheered on Bush, and the academic pointed out some of the problems of using the term “war” for something as diffuse and open-ended as terrorism. (Clearly he’d never come across the US War on Drugs!)
Quite suddenly, Spangler startled me (and the interviewer, and many others, I should imagine) by interrupting a question about the root causes of terrorism, and declaring, flatly, “We know what causes terrorism. Terrorists cause terrorism. The way to stop terrorism is to hunt down the terrorists and stop them.” And though the other two tried to raise questions about political, sociological, and historical factors, Spangler wasn’t having any of it. “Terrorists cause terrorism” – case closed.
I wonder if Spangler realized how crass, naive, rude, and simplistic he sounded. Sadly, I doubt it – his uncritical, unsubtle, black-and-white language seemed to come straight from His Master’s Voice….

On Saturday I went out and bought three new hardbacks:
» Ron Suskind’s “The Price of Loyalty: George W. Bush, the White House, and the Education of Paul O’Neill”
» Paul Krugman’s “The Great Unraveling: Losing Our Way in the New Century”
» David Grossman’s “Death as a Way of Life: Israel Ten Years After Oslo”
This was rather silly of me, as I was just getting started on the monumental “Wars Against Saddam- The Hard Road to Baghdad” by John Simpson, and I’m still working through “J2EE Platform Web Services” by Ray Lai. But just as I picked up “The Price of Loyalty” this morning, my wife dropped a slim volume in front of me. “Weren’t you asking about this?” she said. It was the Whitbread prize-winning “The Curious Incident of the Dog in the Night-Time” by Mark Haddon. The next thing I knew, I’d finished it in one sitting (pausing only for coffee). Brilliant. Essential.

(1) Watch the Patriots win the AFC championship. Even though I don’t really care for American football (I far prefer soccer and rugby football), it’s hard not to be a Pats fan right now.
(2) Watch Millennium Actress on DVD. A wonderful award-winning anime film from Satoshi Kon. 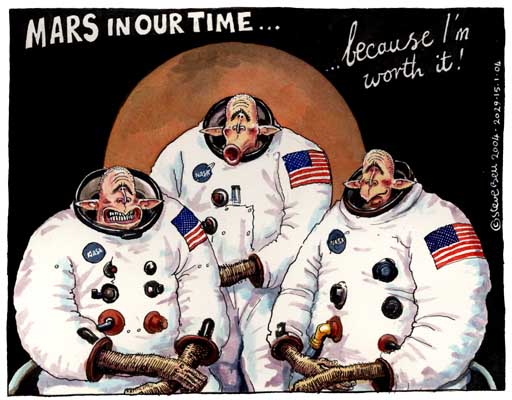 According to the News section of Laurence Juber’s home page, he’s starting production on a new album for Al Stewart. This is consistent with the pattern noted by Fred on the Al Stewart mailing list: